There are few, if any, attractions that have a greater appeal to young children than animals. Research shows that young children feel a natural kinship with and are implicitly drawn to animals, especially baby animals. Animals are an endless source of wonder for children. Children interact instinctively and naturally with animals, talk to them, and invest in them emotionally. A little-known fact: studies show that as many as 80% of the dreams of children younger than 6 are about animals. Additional evidence of animals' importance to children is that animals constitute more than 90% of the characters in children's preschool books.

Farm animals, especially ones children can interact with, feed, pet and groom, can be the foundation -- the anchor attraction for agritainment facilities that target families and children. Unfortunately, animals can also pose serious risks to children, in the form of both injury and illness, if the facility is not properly designed, managed and maintained.

Preventing physical injury from animals that interact with children can be addressed by selecting appropriate and more docile breeds, using younger animals, and providing appropriate supervision.

However, what poses the greatest risk to agritainment guests, and also to the very economic survival of many agritainment businesses, is not the animals themselves. It's a microscopic organism that animals can harbor, Escherichia coli 0157 H7, better known as E. coli 0157:H7 or just E. coli 0157.

E. coli was first identified in 1885 by German bacteriologist Theodor Excherich. E. coli is found in the intestines of both humans and animals. The organisms colonize the human intestinal tract shortly after birth and usually do not cause illness. Rather, they serve the beneficial purpose of suppressing the growth of harmful bacteria and aiding in the synthesis of vitamins.

E. coli had been quietly going about the job of protecting people from harmful intestinal bacteria for eons. But sometime in the early 1970s, scientists believe the mutant strain E. coli 0157 was created when a virus infected benign E. coli and gave it a string of DNA from Shigella, a bacterium that causes severe, bloody diarrhea. The first case of E. coli 0157 illness was reported in 1975.

E. coli 0157 came into the public limelight in 1993 when more than 700 people became ill from eating contaminated hamburger at 90 Jack-in-the-Box restaurants in four western states. Some 200 people had to be hospitalized and four children died. Over the years since, numerous outbreaks have occurred from undercooked contaminated hamburger. Then in 1996, 70 people fell ill from unpasteurized apple juice contaminated either by apples dropped on the ground and coming into contact with manure, or by apples sprayed with contaminated ground water. Over half the cases were children under age 6, one of whom died.

E. coli 0157 causes human illness through the toxins that it produces that destroy the intestinal wall. (Click here to see a QuickTime video of how E. Coli 0157's toxins are released in the intestine.) Illnesses range from mild cases of acute diarrhea to death. Most infections are mild and don't require medical care. Acute illness from E. coli 0157 includes abdominal cramps, vomiting, diarrhea (often bloody) and sometimes fever. However, some cases can result in hemorrhagic colitis (bloody inflammation of the colon). In addition, a small percentage of cases (approximately 8% of all E. coli 0157 infections) go on to develop hemolytic uremic syndrome (HUS), a life-threatening disease characterized by red blood cell destruction, kidney failure, and neurological complications, such as seizures and strokes. People who develop chronic kidney failure may require lifelong dialysis or a kidney transplant. Children under 5 years old, who have not yet fully developed their immunities, are especially susceptible to both E. coli 0157 and development of HUS, which is the leading cause of kidney failure in children in the U.S. Of children affected with HUS, 3% to 5% will die, and as many as 30% will have lifelong medical problems.

It takes only as few as 10 germs of E. coli 0157 to cause illness, whereas it takes about a billion salmonella bacteria to make you sick. Symptoms of E. coli 0157 exposure develop within 5 to 9 days of exposure and people infected usually recover in 5 to 10 days. The Center for Disease Control (CDC) reports that about 200 people a day get ill from E. coli 0157, and a little over an average of one person a week dies from the illness. Only about one-tenth of one percent of all E. coli 0157 infections occur in animal petting areas. However, since the vast majority of illnesses are to very young children, outbreaks receive wide press coverage, and as a result, heighten parents' fears of visiting an animal petting areas. 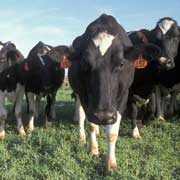 Although the largest number of E. coli 0157 illnesses are attributed to food contamination, studies by the Center for Disease Control show the highest risk (probability of being infected) is from exposure to farm animals, especially cattle. Other ruminants, such as sheep and deer, can also carry the organism. In fact, the growing populations of deer are believed to be responsible for spreading E. coli 0157 to farm animals in many areas. Even dogs, chickens and pigs have been found to harbor E. coli 0157. It is believed they become contaminated by exposure to cattle manure or deer feces. E. coli 0157 is excreted in the manure or feces and can survive for long periods of time on the ground or on the hides of animals. Anything that comes into contact with cattle manure can be contaminated, including ponds, lakes, streams and ground water by field runoff.

E. coli 0157 infections have been traced to manure dust in areas where cattle had been removed 10 days earlier. Contamination from airborne dust was implicated in an Oregon county fair outbreak that sickened 60 people, most of them children, none of whom had touched animals. Research shows that E. coli 0157 can live for months in animal bedding and soil.

Among cattle, up to 50% can be contaminated, with the highest rates occurring in the summer. Studies by the U.S. Department of Agriculture have found animals testing positive for 0157 in every herd that has been tested. Other studies have found 0157 on the hides of 11% of cattle entering meat-processing plants. A 2003 study on the prevalence of E. coli O157 in livestock at 29 county and three large state agricultural fairs in the United States found the organisms in 13.8% of beef cattle, 5.9% of dairy cattle, 3.6% of pigs, 5.2% of sheep, and 2.8% of goats. Complicating the matter is that infected animals show no symptoms and do not become ill. Further, farm residents have a much lower risk of infection than non-farm residents, probably because residents acquire immunity to infection as a result of their childhood and frequent exposure to the organisms. Therefore, there is no way to know that animals are infected, especially on farms where farm residents and workers rarely become infected.

The first E. coli 0157 outbreaks on farms or at petting zoos occurred in 2000 when 56 preschool and school-age children became sick after visiting farms in Pennsylvania and Washington. The CDC did an exhaustive scientific study of both outbreaks and traced the infections to children petting animals or just touching the railings of the animal pens. In 2000-2001 at a Minnesota children's farm day camp, 84 children became ill from touching a calf. Outbreaks at county fairs in Ohio and Wisconsin sickened over 80 people in the summer of 2001. In 2004, an outbreak of E. coli 0157 infected 108 persons that attended a goat and sheep petting zoo at the North Carolina State Fair. Over half of the cases were children 5 years or younger.

The most recent outbreak of E. coli 0157 occurred early this year at three different Florida fairs. It received widespread press coverage after 26 people, 23 of them children, fell seriously ill. Genetic tracing showed the illness was caused by six animals from a petting zoo vendor who was at all three fairs. Among the six animals were two calves, the one animal that poses the highest potential risk, two sheep and two goats. The vendor has been required to quarantine his entire herd of 36 animals for the rest of their lives. Numerous schools canceled field trips to petting zoos throughout the region after publicity of the outbreak.

A 2004 review found there have been 24 infectious disease outbreaks associated with visitors to animal exhibits.

The U.S. Department of Agriculture is sponsoring several research efforts aimed at ridding cattle and manure of toxic E. coli. The most promising method appears to be with probiotic bacteria, which are benevolent bacteria that destroy or crowd E. coli 0157 out of a cow's digestive tract. However, research and testing will take years.

The overall incidence of E. coli 0157 infections has declined by 42% since 1996, according to the CDC. This decline is attributable to better beef processing, more and improved processing plant inspections and better meat handling and cooking procedures that have been implemented throughout the food industry. However, as the recent petting zoo outbreak in Florida documents, E. coli 0157 is still a serious risk at petting zoos and farm animal areas. Just as the food industry has significantly reduced 0157 illnesses, agritainment facilities can likewise take measures to minimize the risk of making their guests ill and damaging their operations financially.

The primary mode of transmission of pathogenic E. coli is the fecal-oral route. Since animal fur, hair, skin and saliva can become contaminated with fecal E. coli 0157, transmission can occur when persons pet, touch or are licked by animals. The vast majority of children's illnesses are caused by hand-to-mouth transfer of E. coli 0157 after touching or being licked by animals. Young children will pet a sheep, goat or calf, or touch a contaminated surface, or sit or fall on ground that is contaminated, and then put their fingers into their mouth or touch food they're going to eat. Research by the CDC and state agriculture departments of E. coli 0157 outbreaks at animal petting areas attribute illness almost entirely to hand-to mouth- or hand-to-food (or pacifier) to mouth transfer. 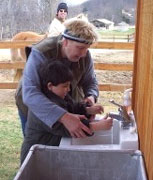 The single most important preventative measure guests can take is handwashing. Not having calves or cows or other ruminate animals and young poultry in petting areas also significantly reduces risk.

Agritainment operators can significantly reduce the risk of an E. coli 0157 or other animal-transmitted pathogenic illnesses through the physical design and management of their facilities: 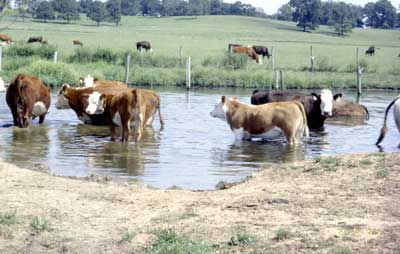 E. coli 0157 can be spread by field water runoff, ponds and streams.

We recommend that agritainment facilities that offer animal contact also

Farm animals are a powerful magnet to children and a key to the success of many agritainment facilities. With a properly designed facility, correct operating procedures, a well-trained staff and informed guests, children can be offered the opportunity to enjoy and interact with farm animals with minimal risk. Doing it right is the best insurance policy for an agritainment facility's long-term success.